HR likes it when I ask him to sing me to sleep.

He will do all the guitar parts which he knows I cannot stand.


One night after telling him off again for doing the guitar parts, he finally settled for a song. The Thong Song by Sisqo. Complete with the rap and all.

Well, at least he didn't do the guitar parts.

The other night I decided to work on a project with HR. That's decided after we had spent most of our evening playing card games.


Since we have different interests, it was quite hard to decide on what to do. He felt my preferences to do scrapbooking was too girly for him while I thought his proneness to sleeping is driving me cuckoo.

So, since I was in the mood for typing and he would never say no to guitar time, we collaborated to produce a song. Me, of course on the lyric and him the music (read: guitar and other electrical stuff, including voice).

I felt so productive. Plus I really like my lyric. It's cute.

Perhaps I'll share more once HR completed the final touches on the song.

He is somewhat perfectionist. I hope he could focus that energy elsewhere. But i can continue being hopeful right?
niBbled by alfina at 2:33 PM 0 deliciOus deSsert(s) 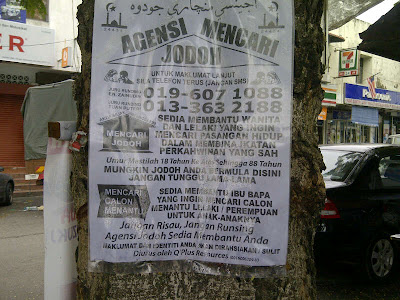 
The other day, I got the opportunity to take a KTM ride. Alone. So I opted for the women's coach.


It was not peak hour so they weren't many people and it was so joyful. The ride. Not the fact that I had to travel alone. On a KTM.

These stupid men who couldn't read or couldn't even bother just strode along on the women's coach. Stupid. If you really couldn't read, the signs, all over the coach (truly all over), couldn't you see, its pink. PINK coach. Not meant for you men.

Who are even stupider than those stupid men?

Stupid women who brought their stupid men on the women's coach.


Sometimes, being too smart can bring problems to oneself. More disadvantages than advantages.

Being oblivious is the key.

Labels: issue of the mind, me

Look who I found. 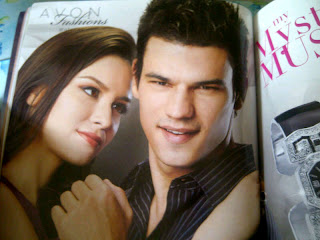 
This is the continuation to this post. I know it is long overdue. But the time is right now.

What happened was, our tyre blew. To pieces. In a dark highway.


We were alright. But I was scared shit. But I didn't go into panic attack. Lucky me. And him. Our phones were both functional. We could still call, sms, bbm and whatsapp. Facebook too if we desired.

Since it was my dad's car. I called him first. Specifically him because I rather not my mama worries because it was at night and she just had her heart surgery. He told on me. To my mama. But all in all, my mama was the logical person to call as she tried to guide me on what to do, with the help .

Above all these to and fro calling and calming each other, I never once thought HR could change the tyre. Not once. He showed braveness of course, looking calm and casual. But we both know underneath the facade, we were both apeshit scared.

So, the moral of the story is never to underestimate your man. Even though he likes to joke around, make funny faces and eat and sleep a lot. Who knew what else he is capable of. 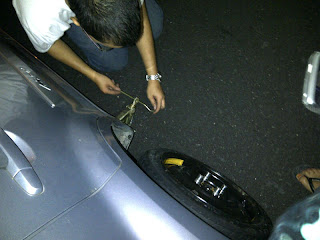 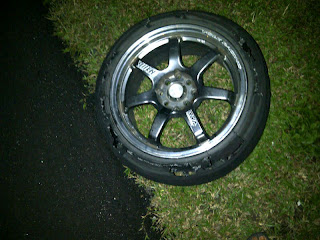 Happy Birthday, abang.
May our life fills with happiness and prosperity.
Always.

During this school holiday, I think I have manage to meet all the important people in my life. Except a few. Just wait because you are all in the list. It just that I have to be in lots of places. So, your time will come.

I had finally catch up with Nana and Roja. It was due. So, what we did was find a place to munch and talk. Like really talk. We didn't even finish the yummy cheesy pizza. Just  talk. I miss so much news about them that it hurts.  You get the idea.

I went to Baah's big night and day. She looked gorgeous in white and pink dress. I got to catch up with Izzah, but not too long. I didn't really got a chance to have heart to heart. Or share stories. Lols.

Of course, I met Mard and K.A and Bayah. It was nice reminiscing about the younger time. Then again, I met Bayah too often already.

I also spent quality time with my mama. In faraway land. Shopping. Awesome, I tell you~

Now, there are a few more on my list~

HR just gotta keep up with me.
niBbled by alfina at 8:00 AM 1 deliciOus deSsert(s)

I was looking at the number of post in my blog since September 2008...


..... and I realized the number is increasing and then recently decreasing very badly.


How can there only be 60-ish post in 2012? I thought it is supposed to be the busiest and life altering year of my life?

Well, I get busy, that's why. (The power of positive thinking).

I remember once I posted about HR query to me;


BTW, I am the first one. Too busy having fun, yo! 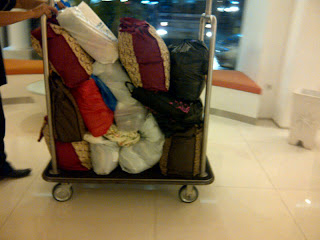 Our first day shopping in Bandung.
My mom's and four other teachers' belongings.

HR trying to be cute 2

So, I showed HR this one funny post from Proudduck.com (read: here) that I totally laugh out loud. I am always so envious of her (Vivy) and her awesome life. Envious but happy for this unknown stranger. But I am loving mine also.

Nowadays, whenever I said something or point out some silly things HR did, he will always quoted Vivy as he claimed my idol.

HR came back for lunch just now. From invigilating SPM. For one menumpang candidate. In my school. That did not show up.

He was surprised to see me on his computer. He said usually I am too lazy to switch on the computer, tether the broadband, blablabla that I rather use the tablet.

Except that I miss typing.

Seriously, I do. All this tablet business has negative effect on penmanship and also typing skills.

So here I am typing nonsensical in my blog and others' FB statuses.


My house is too quiet now.


Last weekend it was fill with laughter and little kiddies. My in-laws were here. It was fun gathering and outings and more food outing. Lol.

A few more hours till I'm back again in real civilization. A real one.