Who needs sleep when you can watch movies instead?

I watched a bunch of movies yesterday.Four movies, to be exact. This is me catching up on the movie fiasco.
So, the best one is Horrible Bosses. It is HR kinda movie. Smart jokes and wittinness. Directed by one of his favourite guys, Seth Rogen. The movie is awsome. Well, the company too.
Water for Elephant is a snooze. Typical love story. Maybe the setting is different,circus. It is mainly about a boy loves a girl he can't have but the boy gets the girl anyway.
Sucker Punch sucks.
Re-watch Killers because Saqinah hasn't watch it yet. I like drooling over Ashton Kutcher, all over again. Who wouldn't want Ashton as her guy?

Today is superheroes day. I got Green Lantern and Captain America line up. Yes, I haven't watch those movies. 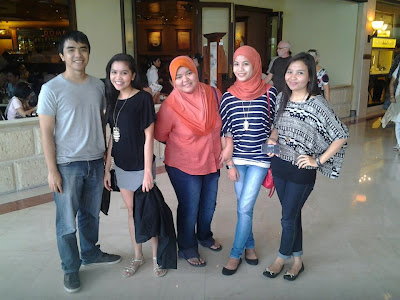 The most beautiful discovery true friends make is that
they can grow separately without growing apart.
~Elisabeth Foley
niBbled by alfina at 9:13 PM 0 deliciOus deSsert(s)

First of all, let me start off by saying I am a patriotic person. And I love my country.
So, I was very happy when I realized that there's a Pustaka Komuniti at JJ near my house. It is a some sort of mini library by Perpustakaan Negara. Oh, I love to read. A lot.

As I checked out the library, I thought to myself, the collection of English novels are quiet awesome. Not to mention the great amount of quantity. So I thought that I am lucky to have this book heaven near my house which has decent parking spaces.

That day, I decided to become a member. And straightaway borrowed some books to bring back to Gua Musang. I had chosen a few titles. Apparently, at that time, the system is down so I was unable to join the membership. I was disappointed. I put back the books.

So, the next weekend that I returned to KL, I went back there to check the membership form that I had manually fill. You know how excited I was? I arrived at 9.30a.m only to realize that it opened at 10.00a.m (well, that is after waiting for thirty minutes or so). But, since I am now on official member, I borrowed a few books.

Weeks later, upon returning the book, I spent my time, choosing books. There was not so many titles that I like anymore but I patiently browsed and browsed. After almost half an hour of carefully selecting and putting the book down at the counter, I was told the system was down. I could not borrow them.

Oh I was pissed.

I just put the books down there and left. I could not contain my anger. That auntie who was so busy yapping about on the phone might just get a mouthful from me.

So much for being lucky.

Maybe they should just opt for borrowing manually.

niBbled by alfina at 9:49 AM 1 deliciOus deSsert(s)

Labels: activity, issue of the mind

On our way back to GM by bus, me and Saqinah were blabbing about something. I can't really remember but at one point we were complaining about the bus and the journey. Suddenly, as I was yapping on and on about being lenguh bontot, she clapped her hand. In sheer happiness.

niBbled by alfina at 4:44 AM 1 deliciOus deSsert(s)

You don't realize how much you miss him...

.... until you see him looking that awesome in a video in someone else's blog.

Sometimes, I wish that my wise mind would just follow my wild heart.
niBbled by alfina at 7:55 PM 0 deliciOus deSsert(s) 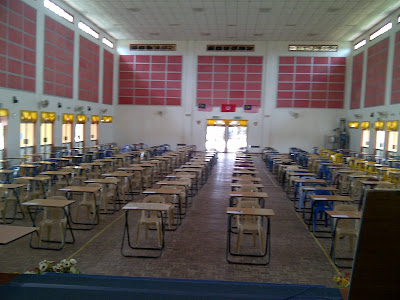 After reading this, I asked HR the same question.

Me : You think you ever gonna kahwin dua?
HR: No lah. You are my only one.
Me: Yeah, rite. Will you keep your word?
HR: Ye la sayang... But, you never said anything about kahwin tiga.

Do you know how easily I can cry?

There is one time when I was so hungry that I didn't know what to do. I had no food. I had some sources to buy food but I was too tired and too lazy. So I cried. Silly.

In my form 5 class when I was teaching the poem, 'In the midst of hardship'. I was reading the poem with feeling and explaining to them line by line. I was so touched by the strength that my tears dropped. I had to look away to ensure none of the kids saw me.

Invigilating PMR. There's a few kids that I was sure so poor that they could not afford pens or pencils. They brought it but you can see that it's too short or too used. Or maybe they did forget about it but they looked so poor that I was sure, they could not afford it. One kid in particular did not have an eraser. At first, I wasn't to sure if he had it or not. But after a while I saw a few dirty spots on the OMR paper like he tried to rub it with merely his fingers. I am all tears weyh.

You know how it is the rainy season especially here in Kelantan. You know how GM is so huge with so many empty spaces but not so many schools. So, I saw a kid was riding a motorcycle in a heavy rain to get home after PMR. There's no shelter if he needed to stop so he continued on. He was so wet and I didn't think that he can barely see much in the rain. Even, me driving in the car was struggle. I can't help him. So, I cried. Wishing he can get home safely and he will not get a fever so that he can continue to take his PMR.

I know you miss me

Today is a productive day for me.

I managed to clean all my dirty clothes in the hamper. I never had such a huge pile up of dirty clothes. I prefer to wash daily than weekly. However, invigilating PMR really made me tired me. Woke up so early in the morning and returned only after Asar. It's a 40 minutes drive with all kinds of lorries and huge cars. I did not have the time in my hand. It's only between sleeping, eating and resting.

I finished tuition for my 4S1. I mean, I just took over the class. I felt that these bunch of happy people should get extra attention. With me being away for almost two weeks (due to the PMR) and the exam starting on the 11th October, I was worried. Now I am worry-free. I hope they can get the marks they deserve after two days of tutoring them.

I had a breakfast outside with Saqinah. Which was awesome. I never really eat out in the morning. Usually, because I woke up late on the weekends. But there's also this excuse that we are not really sure of which kedai serve good breakfast.

We hang out at the sungai near our house. So near that we can actually walk. But of course we didn't. I got to rendam my feet while Syaz tried her new polaroid camera. Next, we managed to locate the supposed to be famouse eating spot in Gua Madu (after so many phone calls and u-turn). Overall, the food was okay. But the scenery was awesome.

Mostly, I managed to eat a lot.

Next on my agenda is to fill the claim form for PMR, cabut rumput and sweep and mop the room/house.

Oh, man! It's raining. The rumput has to wait, again~

I don't actually particularly like cats. It i s more like I have no feeling towards cats. I mean they are cute and all. But as long as they are being cute elsewhere and being care of by others, I am fine with it.

I mean I don't go and suddenly sepak kucing out of nowhere. But disturbing and invading my freedom to sidai baju outside my own house, I hate it. Stop harassing my legs and let me sidai baju in peace. I had to kais the kucing from my leg. But when the cat didnt get the message I was forced to sepak it. I don't like myself when I did that. But I had to.

The cat forced me to enter my own house in speed of light to avoid it coming in the house - I freaking hate you. Now, invading my own freedom in my own room. Damn you. I can't open my window freely; in case the cat jumps into our house.

I might actually run over the cat one day.

I am not particularly a violent person.

I stress that I have indifferent feeling towards cats. But making me live in fear, I might just do it.

This is not the first time the cat has troubled me.

It actually left something inside our house before. It almost made us puke. It is worse than a simple tahi kucing.

Before I got my first paycheck (which I only received after 5 months of working), I have been saying to myself, I want to buy something (A THING) that signifies my very own first pay check. Something major.

So, I said to myself, get jewellery. Gold is always good. A simple ring or a cute bracelet.

In the end, I ended up with a Blackberry. Instead of peer pressure, it's family pressure. But I love my purchase.

But, I still linger on the jewellery.

And I bought it. Self-satisfaction. 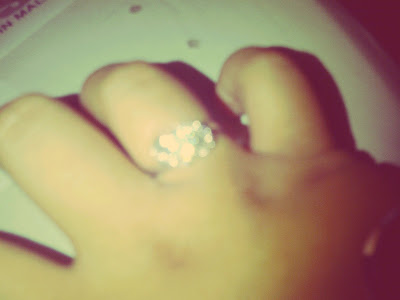 Yes, I know you cant really see it. It is meant to be that way. Self-satisfaction, remember. Just know, that it truly bling.
niBbled by alfina at 3:35 AM 1 deliciOus deSsert(s)

I know I am supposed to be on a tight budget. I should not splurge around much. I know. I feel like I can disciplined myself better when I am in GM.

Who am I kidding? It is not discipline. It is actually because there is nothing there to be splurged on. Nothing. Nadaa. That's why.
So, I tried limiting my numbers of going back to this awesome place I call home, KL. Which so far I haven't succeeded.

KL is far too awesome.

So, following my mother's advices and pleads, I completed the egtukar. Now, let's just pray.

So what if I will be on a tighter budget if I am in KL? As long as, I am home rite (READ: i ain't need to pay rent, internet bills or any other bills).